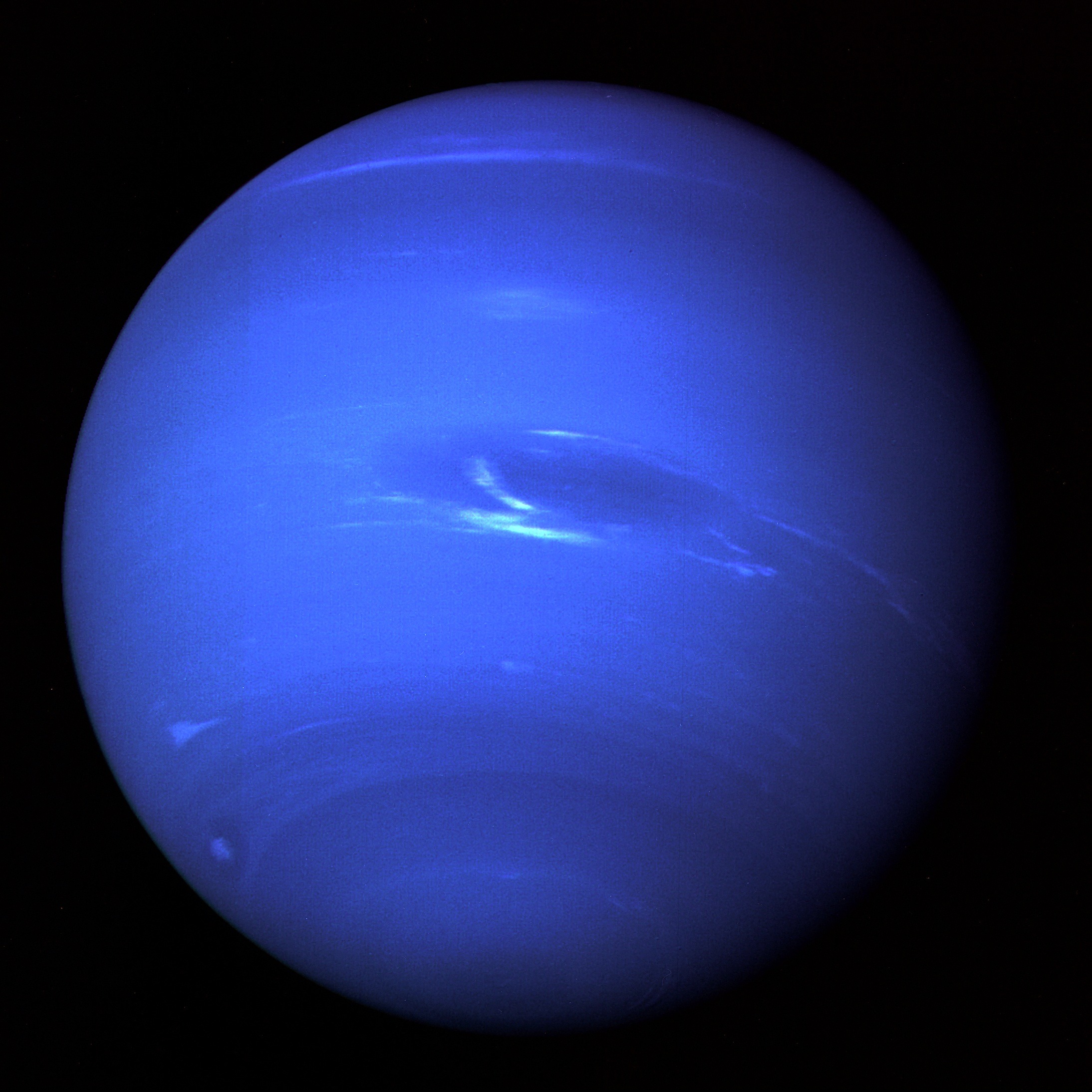 Neptune is the furthest planet from the sun in our Solar system.

- It takes Neptune 16.1 hours for its rotational period.

- Neptune takes 59 800 Earth days to complete an orbit around the sun.

- The mean temperature on Neptune is -200 degrees Celsius.

- Neptune has a magnetic field and a ring system as well as 14 moons.

- To escape Neptune's gravity you would need an escape velociy of 23.5km/s.

Neptune is the eighth and farthest-known Solar planet from the Sun. In the Solar System, it is the fourth-largest planet by diameter, the third-most-massive planet, and the densest giant planet. It is 17 times the mass of Earth, slightly more massive than its near-twin Uranus. Neptune is denser and physically smaller than Uranus because its greater mass causes more gravitational compression of its atmosphere. The planet orbits the Sun once every 164.8 years at an average distance of 30.1 AU (4.5 billion km; 2.8 billion mi). It is named after the Roman god of the sea and has the astronomical symbol ♆, a stylised version of the god Neptune's trident.


Neptune is not visible to the unaided eye and is the only planet in the Solar System found by mathematical prediction rather than by empirical observation. Unexpected changes in the orbit of Uranus led Alexis Bouvard to deduce that its orbit was subject to gravitational perturbation by an unknown planet. After Bouvard's death, the position of Neptune was predicted from his observations, independently, by John Couch Adams and Urbain Le Verrier. Neptune was subsequently observed with a telescope on 23 September 1846 by Johann Galle within a degree of the position predicted by Le Verrier. Its largest moon, Triton, was discovered shortly thereafter, though none of the planet's remaining 13 known moons were located telescopically until the 20th century. The planet's distance from Earth gives it a very small apparent size, making it challenging to study with Earth-based telescopes. Neptune was visited by Voyager 2, when it flew by the planet on 25 August 1989; Voyager 2 remains the only spacecraft to visit Neptune.The advent of the Hubble Space Telescope and large ground-based telescopes with adaptive optics has recently allowed for additional detailed observations from afar.


Like Jupiter and Saturn, Neptune's atmosphere is composed primarily of hydrogen and helium, along with traces of hydrocarbons and possibly nitrogen, though it contains a higher proportion of "ices" such as water, ammonia and methane. However, similar to Uranus, its interior is primarily composed of ices and rock; Uranus and Neptune are normally considered "ice giants" to emphasise this distinction.Traces of methane in the outermost regions in part account for the planet's blue appearance, though an unknown component is believed to color Neptune a deeper blue compared to Uranus.

In contrast to the hazy, relatively featureless atmosphere of Uranus, Neptune's atmosphere has active and visible weather patterns. For example, at the time of the Voyager 2 flyby in 1989, the planet's southern hemisphere had a Great Dark Spot comparable to the Great Red Spot on Jupiter. More recently, in 2018, a newer main dark spot and smaller dark spot were identified and studied. In addition, these weather patterns are driven by the strongest sustained winds of any planet in the Solar System, with recorded wind speeds as high as 2,100 km/h (580 m/s; 1,300 mph). Because of its great distance from the Sun, Neptune's outer atmosphere is one of the coldest places in the Solar System, with temperatures at its cloud tops approaching 55 K (−218 °C; −361 °F). Temperatures at the planet's centre are approximately 5,400 K (5,100 °C; 9,300 °F). Neptune has a faint and fragmented ring system (labelled "arcs"), which was discovered in 1984, then later confirmed by Voyager 2.