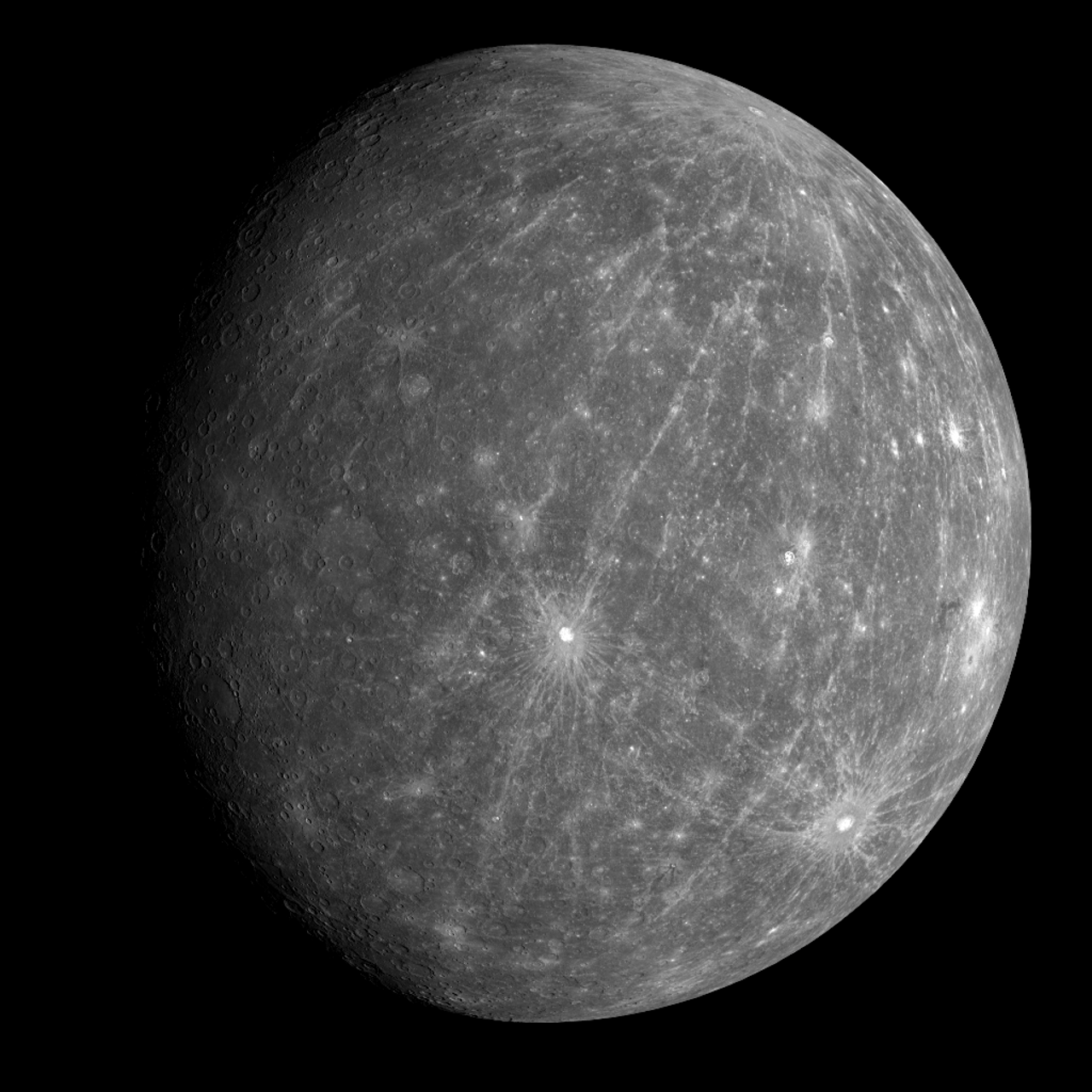 Mercury is the smallest planet in our solar system and closest to our sun.

- It takes Mercury 1407.6 hours for its rotational period.

- Mercury is the smallest planet with a diameter of 4879 km.

- Mercury is the closest planet to the sun in our solar system and takes 88 Earth days to complete an orbit around the sun.

- Mercury has an escape velocity of 4.3km/s.

Mercury is the smallest planet in the Solar System and the closest to the Sun. Its orbit around the Sun takes 87.97 Earth days, the shortest of all the Sun's planets. It is named after the Roman god Mercurius (Mercury), god of commerce, messenger of the gods, and mediator between gods and mortals, corresponding to the Greek god Hermes (Ἑρμῆς). Like Venus, Mercury orbits the Sun within Earth's orbit as an inferior planet, and its apparent distance from the Sun as viewed from Earth never exceeds 28°. This proximity to the Sun means the planet can only be seen near the western horizon after sunset or the eastern horizon before sunrise, usually in twilight. At this time, it may appear as a bright star-like object but is often far more difficult to observe than Venus. From Earth, the planet telescopically displays the complete range of phases, similar to Venus and the Moon, which recurs over its synodic period of approximately 116 days.


Mercury rotates in a way that is unique in the Solar System. It is tidally locked with the Sun in a 3:2 spin–orbit resonance, meaning that relative to the fixed stars, it rotates on its axis exactly three times for every two revolutions it makes around the Sun. As seen from the Sun, in a frame of reference that rotates with the orbital motion, it appears to rotate only once every two Mercurian years. An observer on Mercury would therefore see only one day every two Mercurian years.


Mercury's axis has the smallest tilt of any of the Solar System's planets (about 1⁄30 degree). Its orbital eccentricity is the largest of all known planets in the Solar System;[b] at perihelion, Mercury's distance from the Sun is only about two-thirds (or 66%) of its distance at aphelion. Mercury's surface appears heavily cratered and is similar in appearance to the Moon's, indicating that it has been geologically inactive for billions of years. Having almost no atmosphere to retain heat, it has surface temperatures that vary diurnally more than on any other planet in the Solar System, ranging from 100 K (−173 °C; −280 °F) at night to 700 K (427 °C; 800 °F) during the day across the equatorial regions. The polar regions are constantly below 180 K (−93 °C; −136 °F). The planet has no known natural satellites.


Two spacecraft have visited Mercury: Mariner 10 flew by in 1974 and 1975; and MESSENGER, launched in 2004, orbited Mercury over 4,000 times in four years before exhausting its fuel and crashing into the planet's surface on April 30, 2015.The BepiColombo spacecraft is planned to arrive at Mercury in 2025.