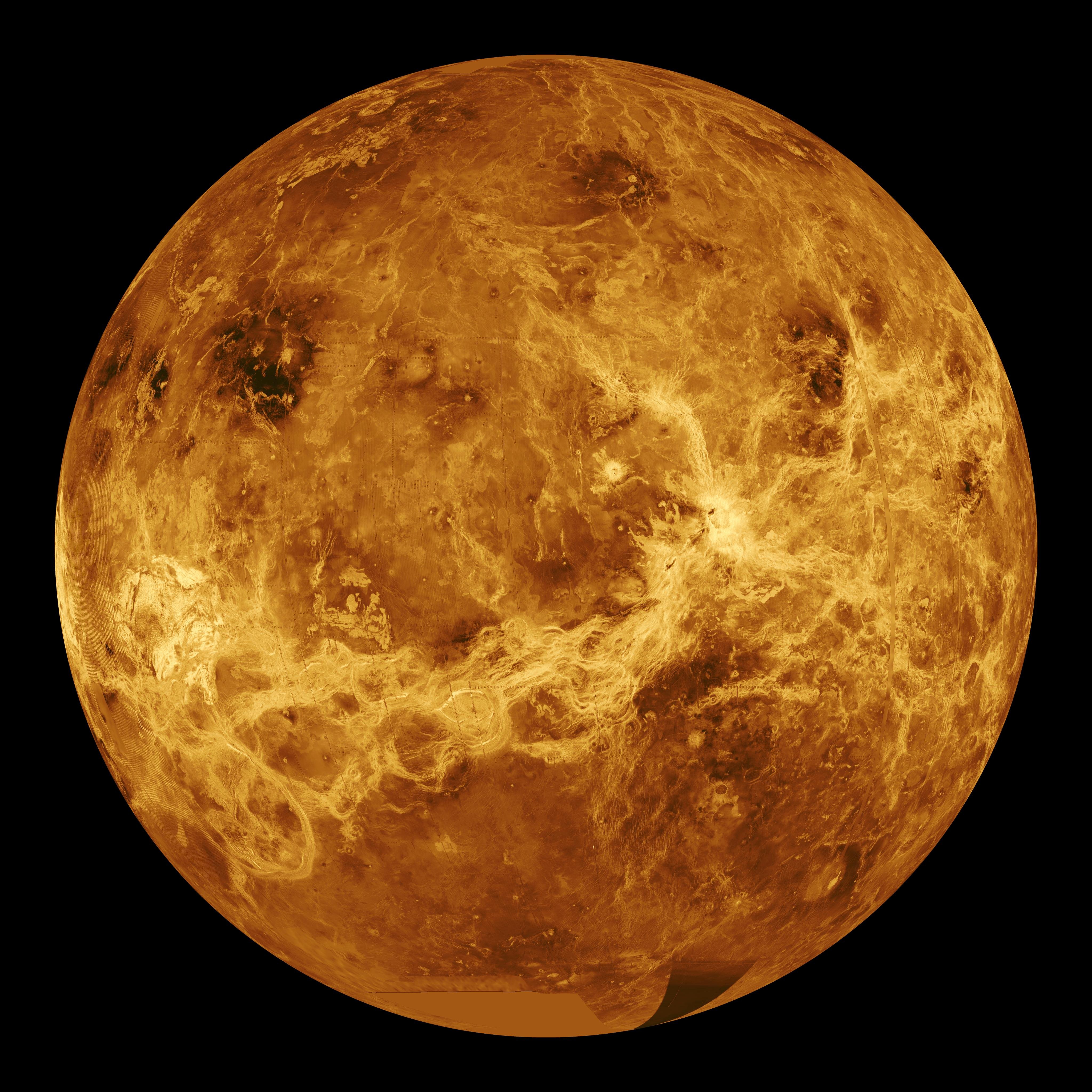 Venus is the second closest planet to the sun and is also often referred to Earths twin due to it being similar in size.

- It takes Venus 5832.5 hours for its rotational period and it rotates in the opposite direction as earth.

- Venus has a diameter of 12104 km which is only slighty smaller than the Earth.

- Venus takes 224.7 Earth days to complete an orbit around the sun.

- Due to Venus thick atmosphere that traps heat it is the hottest planet in our solar system. The mean temperature on Venus is 464 degrees Celsius.

- Venus has a thick atmosphere that consists mainly of carbon dioxide (96.5%), Nitrogen(3.5%) a with clouds of sulfuric acid.

- To escape the gravity of Venus you require an escape velocity of 10.4km/s.

Venus is the second planet from the Sun. It is named after the Roman goddess of love and beauty. As the brightest natural object in Earth's night sky after the Moon, Venus can cast shadows and can be, on rare occasions, visible to the naked eye in broad daylight. Venus lies within Earth's orbit, and so never appears to venture far from the Sun, either setting in the west just after dusk or rising in the east a little while before dawn. Venus orbits the Sun every 224.7 Earth days. With a sidereal rotation period of 243 Earth days and a synodic day length of 117 Earth days, it takes significantly longer to rotate about its axis than any other planet in the Solar System, and does so in the opposite direction to all but Uranus (meaning the Sun rises in the west and sets in the east). Venus does not have any moons, a distinction it shares only with Mercury among the planets in the Solar System.


Venus is a terrestrial planet and is sometimes called Earth's "sister planet" because of their similar size, mass, proximity to the Sun, and bulk composition. It is radically different from Earth in other respects. It has the densest atmosphere of the four terrestrial planets, consisting of more than 96% carbon dioxide. The atmospheric pressure at the planet's surface is about 92 times the sea level pressure of Earth, or roughly the pressure at 900 m (3,000 ft) underwater on Earth. Even though Mercury is closer to the Sun, Venus has the hottest surface of any planet in the Solar System, with a mean temperature of 737 K (464 °C; 867 °F). Venus is shrouded by an opaque layer of highly reflective clouds of sulfuric acid, preventing its surface from being seen from space in visible light. It may have had water oceans in the past, but these would have vaporized as the temperature rose due to a runaway greenhouse effect. The water has probably photodissociated, and the free hydrogen has been swept into interplanetary space by the solar wind because of the lack of a planetary magnetic field.


As one of the brightest objects in the sky, Venus has been a major fixture in human culture for as long as records have existed. It has been made sacred to gods of many cultures, and has been a prime inspiration for writers and poets as the "morning star" and "evening star". Venus was the first planet to have its motions plotted across the sky, as early as the second millennium BC.


Due to its proximity to Earth, Venus has been a prime target for early interplanetary exploration. It was the first planet beyond Earth visited by a spacecraft (Mariner 2 in 1962), and the first to be successfully landed on (by Venera 7 in 1970). Venus's thick clouds render observation of its surface impossible in visible light, and the first detailed maps did not emerge until the arrival of the Magellan orbiter in 1991. Plans have been proposed for rovers or more complex missions, but they are hindered by Venus's hostile surface conditions. The possibility of life on Venus has long been a topic of speculation, and in recent years has received active research.